How to Install uPVC Windows

UPVC windows have been around since the 1970s. Since their creation, they have been used in almost every household. This type of window is also known as vinyl sliding or vinyl windows and they have are known to be more superior to timber window frames. However, there have been issues concerning its safety with regards to environment conservation. In spite of this, a lot of people are still interested in installing UPVC window frames in their homes as it is relatively more cost efficient than the other typical window materials that have been known to homeowners and builders.

One of the reasons why a lot are looking to install UPVC windows is that aside from helping to save money, it is also a good insulator. Unlike the common timber frame windows, UPVC is able to keep and maintain the heat inside the house especially during the winter season. It will generally improve the insulation in your house and compared to timber frames that are infamous for its poor heat maintenance, it would provide you with better warmth and comfort during the cold seasons. UPVC has high thermal resistance which refrains heat from going out the house.

Aside from this benefit, UPVC windows are very stable. It would not change in shape, texture, state, or appearance when the season changes. You must have noticed how your regular window frames would shrink during the dry, warm, and hot seasons and swell once the cold seasons come in. This might sound harmless but it actually poses risk and compromises the security for your home against breakage and burglary. Regular timber window frames also require more maintenance than the UPVC. You would need to repaint timber window frames to keep it from rotting and you would also need to apply wood putty treatment. More or less, the UPVC could stay as is for a long time once it is installed. If you now wish to have UPVC installed in your own home, read on for the steps on how you can install UPVC windows yourself.

The first step in installing UPVC window frames is to measure the interior part of the window opening where you will install the UPVC before purchasing the UPVC vinyl. This will ensure that the vinyl slide you will purchase is of accurate measurement. You should take note that the opening should be a bit wider and higher than the new window that is set to be installed.

Next, you can now start removing the existing window glass fixture to be replaced by the UPVC. Follow safety precautions especially if you are dealing with glass. It is best if you can work from the inside of the house and see to it that you dispose off the glass with full care. It is also recommended that you keep the inside stop which could be reused.

Next on the step’s list is to seal the nail fin which is efficient in preventing water leakage.

The next part is the installation of the UPVC. Push it towards the opening while making sure that it is in the correct positioning. Use screws that are normally included in UPVC packages or those that you would need to purchase separately. If you followed the recommendation of keeping the inside stop, you can now use and reinstall it.

The final step in UPVC windows installation is caulking or sealing around the frame. You can use a water-based foam sealant or some butyl rubber. 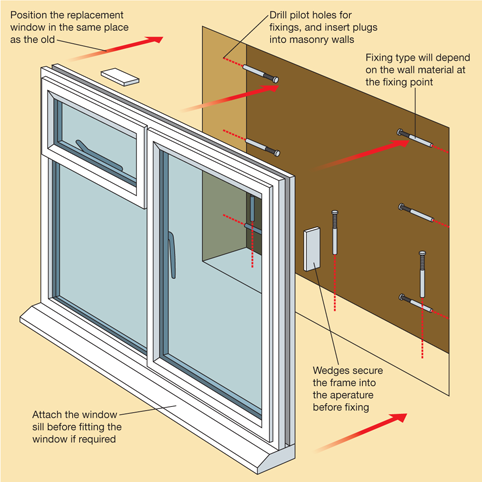